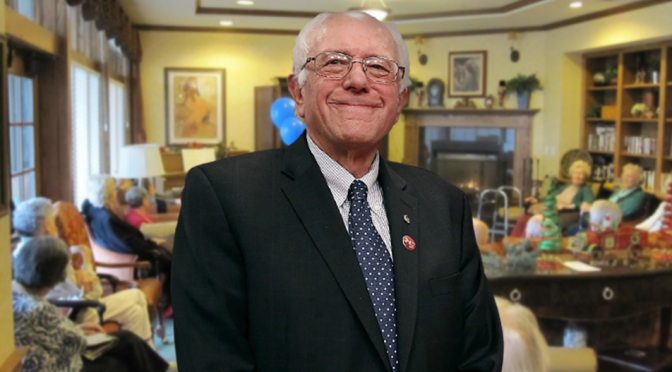 BURLINGTON, VT – After being defeated in the final Super Tuesday primaries of the season, Bernie Sanders has accepted that he lost his chance at seizing the Democratic election, and returned to the Twin Rivers Manor in Southern Burlington. Much to the disappointment of his followers, who complained on Twitter about his loss rather than actually voting for him.

“It just feels good to relax.” Sanders says as he sips on a cup of tea and reads the morning paper for the first time in months. Sanders has not been in the facility since he started his campaign back in April 2015, concerning staff.

“He’s pretty senile and that’s pretty evident based off his campaign.” Henry Wellington, director of the manor stated, “all the free stuff policies and stuff. He’s trying to relive his hippy days in college.”

Sanders got beaten hard in Super Tuesday, with a not so surprising defeat at the hands of Democratic nominee Hillary Clinton in several states, including the crucial California. Post-race plans for the elderly senator are uncertain, but it is likely to include sitting by a pond playing chess with other retirees for the remainder of his life.